(Note: this essay is dedicated to my father, the mathematician Henri Moscovici, and in memory of my mother, Elvira Moscovici, mathematics teacher) 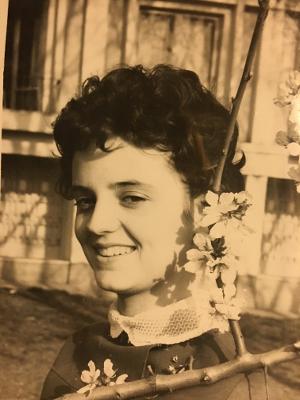 It’s only relatively recently in cultural history—during the past hundred years or so–that the disciplines became so highly specialized (and advanced) that it’s nearly impossible for anyone to be “cutting edge” in both the arts/humanities and science/mathematics. But the fields of human knowledge did not used to be so sharply delineated. Plato, for instance, was not only a great writer of dialogues and one of the greatest philosophers of all time, but also an outstanding mathematician. The school he founded in 387 BC, the Academy of Athens, was inspired by Pythagoras and emphasized mathematics as the foundation for all the other fields of inquiry. Likewise, his student, Aristotle,was considered a founder of several empirical branches of science, including physics, astronomy and biology (or natural science, as it was called until the nineteenth century).

Even as late as the Enlightenment, the French philosophes—particularly Condorcet, Condillac and Buffon–could hope to be at the forefront of scientific discoveries and be well-versed in literature, art and philosophy. One of my personal favorites, the salonnière Emilie (Marquise) du Châtelet, was not only highly cultivated, but also a world-class mathematician and physicist who conducted her own scientific experiments—such as suspending wooden spheres from rafters–to test Newton’s theories.

This confluence of the disciplines—like the ideal of the “Renaissance man” (or woman) who masters all fields–has become only a distant memory in intellectual history. But sometimes there are resonances and intersections between the arts and the sciences even today. Like art and poetry, mathematical innovations are the result of an intuitive process that depends upon inspiration.  As Bertrand Russell eloquently stated in his essay, “The Study of Mathematics”  (1919):

“Mathematics, rightly viewed, possesses not only truth, but supreme beauty—a beauty cold and austere, like that of sculpture, without appeal to any part of our weaker nature, without the gorgeous trappings of painting or music, yet sublimely pure, and capable of a stern perfection such as only the greatest art can show. The true spirit of delight, the exaltation, the sense of being more than Man, which is the touchstone of the highest excellence, is to be found in mathematics as surely as poetry.”

Just as mathematics is, in some ways, an art form, so the arts and humanities borrow some of their standards of value (and proof) from math and science. In my estimation, the best writing in the humanities and social sciences abides by the standards of logical rigor, valid or plausible premises and “elegant proof” that are upheld in the sciences.  An elegant argument in the humanities, as in mathematics, is one that:

a)   uses a minimum of additional assumptions

c)    is original, in arriving at new and surprising conclusions

d)   is based on defensible premises

e)   its conclusions are generalizable, in that they can be applied to similar problems

But there are even closer resonances between art and science. If mathematics is, in some respects, an art form—at least in its creative process–the opposite can be said as well: art can be mathematical. Even in the twentieth and twenty-first centuries, when the push for the specialization of the disciplines has reached an extreme, there are artists who illustrate the elegance, beauty and abstraction of mathematics.

Escher remains one of the most popular twentieth century artists, internationally. Recently, the Escher exhibition in Brazil became, according to Blouin Art Info, “the world’s most popular art show,” drawing tens of thousands of viewers. (Blouin Art Info, April 13, 2012) Part of Escher’s continuing popularity can be explained in terms of the universal appeal of his art, which attracts those who love art and those who love mathematics or science alike. Like Picasso and Brancusi, in many respects Escher was an autodidact. He had little formal training in mathematics.

In fact, he discovered his passion for geometry, topology and visual paradoxes almost by accident, thanks to his travels to Alhambra, Spain. Escher was fascinated by the intricate, mathematical designs—or tessellations–he saw in the architecture of Alhambra, whose interlocking repetitive patterns of design would inspire much of his artwork.

Escher’s keen interest in geometric patterns led him to study non-Euclidian geometry. Euclidian and non-Euclidian geometry differ in their representation of parallel lines. Euclid’s fifth postulate states: “Within a two-dimensional plane, for any given line X and a point A, which is not on X, there is exactly one line through A that does not intersect X.” Simply put, in Euclidian geometry two parallel lines will never meet. They will remain at the same distance from one another, to infinity. In non-Euclidean geometry, however, parallel lines can meet, curving towards each other and eventually intersecting. In many of his lithographs, drawings, sculptures and paintings, Escher creates optical illusions that give us a representation of non-Euclidean space. One of his most famous and interesting works, Ascending and Descending, depicts lines of people climbing up and down an infinite loop. This construction is impossible in reality but can be created through playing with perspective.

Escher was also intrigued by topology. This relatively new branch of mathematics, derived from the Greek roots “topos” or “place” and “logos” or “word” and “study of,” analyzes the properties of objects that remain the same even when objects are deformed or stretched. According to  my father, Henri Moscovici (who works in the field of topology), topology can be explained as follows: “Two “objects” (topological spaces) are considered identical if they are homeomorphic, ie there is such a continuous function with continuous inverse between them. For example, a perfect sphere and the surface of potato or a tomato, are homeomorphic.”

In fact, of particular interest to Escher are such “homeomorphisms.” One doesn’t have to know much about mathematics, however, to appreciate Waterfall Up and Down, which includes the irregular perspective we find in the Moebius strip.  Escher’s art represents the best of both worlds. For those who love math and science, Escher is one of the rare artists that gives these fields an artistic form. For those of us who don’t, Escher shows us that mathematics can be fun and ingenious.