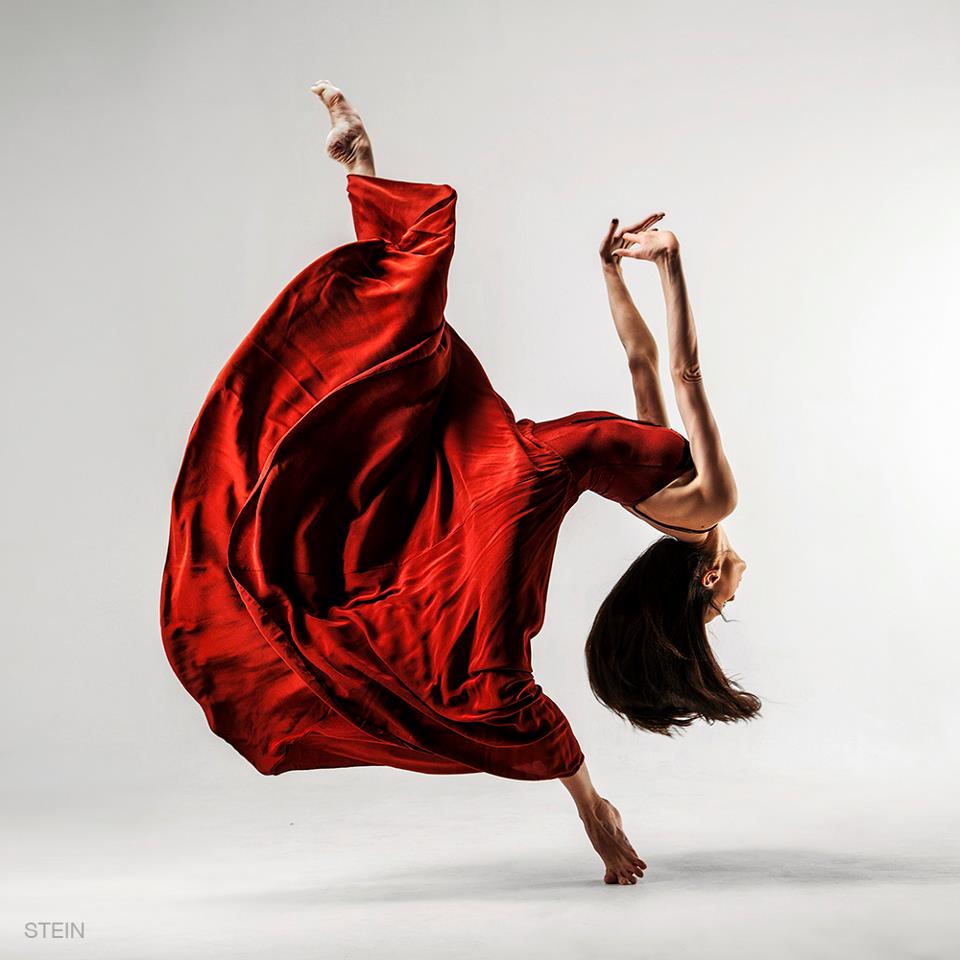 Vadim Stein’s Sculptural Photography
by Claudia Moscovici
Given his background, it’s not that surprising that Vadim Stein’s photographyhas a sculptural–even monumental–look to it. Born in Kiev, Ukraine, Stein studied sculpture restoration. He also worked as an actor and lighting designer, fields which play a significant role in his sculptures, in which carefully chosen lighting helps create the folds and shapes of the the people he photographs, often in staged and dramatic positions.

Of course, “people” may not be the right word to describe the beautiful women, often nude and partially wrapped in stretched out fabrics, that Stein usually photographs. Each of them has a perfect, dancer’s body. Their sinuous forms and muscular shapes can be detected even underneath the cloth that envelops them. There’s a classical perfection in the figurative photography of Vadim Stein. That too is no accident, since classical aesthetics has influenced this philosophical photographer.

As we recall, for Plato beauty and ethics were inseparable. The philosopher draws the connection between these fields most famously in The Symposium, his best-known dialogue about beauty, ethics and love. According to the prophetess Diotima, aesthetic beauty was one of the main ways human beings could learn about the perfection of  Forms. By appreciating first the concrete beauty of a human being (or artistic object), then the more abstract beauty of all human forms, then beautiful objects and so on, one could eventually arrive at the even more abstract notion of Beauty itself. Thus Plato sets up his famous idealist ladder from aesthetics to ethics, which leads from physical sensation to pure form; from the particular to the universal; from the individual to the most important form, which he calls the Good.

In his images, Stein establishes a similar connection between aesthetic beauty and ethics, one which is as far removed as possible from any moralism, however: “Solving the aesthetic problem,” Stein states, “I also reveal many ethical questions. For me, such things as love and death are revealed through the aesthetic category, beauty – the predecessor of ethics.” (http://500px.com/stein) Almost all of Stein’s photographs have not only a sculptural look, but also an abstract feel to them. The nude bodies he photographs are displayed on a pedestal and wrapped in fabrics that partly hide the (usually) female form and renders its sensual beauty and erotic appeal more subtle and abstract.

I find that many of Stein’s images are also inspired by the field of topology. This relatively new branch of mathematics, derived from the Greek roots “topos” or “place” and “logos” or “word” and “study of,” analyzes the properties of objects that remain the same even when objects are deformed or stretched. According to my father, the mathematician Henri Moscovici (who works in the field of topology), topology can be explained as follows: “Two “objects” (topological spaces) are considered identical if they are homeomorphic, ie there is such a continuous function with continuous inverse between them. For example, a perfect sphere and the surface of potato or a tomato, are homeomorphic.”

Stein constantly creates such homeomorphisms, experimenting via lighting, fabrics and dramatic positions to change properties of the human form. In so doing, he creates, through his sculptural (and philosophical) photography, an homage to the perfection of femininity and to the ethical beauty of form.